We planned to stay for seven days in a single city and thoroughly explore/enjoy it.  We wanted to avoid the temptations of side trips and tours; and walk as much as possible, instead of using public transportation.

We got our flight and hotel as a package from European Destinations, an outfit that we found online. http://www.europeandestinations.com/     The price was $840 per person, for round trip airfare (Alitalia) direct between Boston and Rome and for seven nights hotel (Hotel Valle, near the central train station and also near the Coliseum), including breakfast.  There were three of us: me, my wife Barbara, and her friend Lois.  We had adjoining hotel rooms.  The price was great.  The hotel was great.  No hassles.  No problems.

November is the off season in Rome.  The travel books all said that it always rains in November.  weather.com forecast rain for every day of our trip.  As it turned out, it was drizzling on the day we arrived, but every other day was bright and sunny, about 60 degrees F.  Like spring.

Because we had heard that lines for tickets to the Vatican were long, we bought those tickets online in advance.

Marvels of everyday life in Rome.

At the airport,
After going through passport check, luggage claim and customers (just a walk through), we had to go upstairs to get a train to downtown Rome (Roma Termini).  We bought the ticket (for the "Leonardo Express") at a ticket booth, and then had to insert the ticket in a yellow box near the track to get it "validated". The trains run about once every half hour and take about half an hour.  We arrived at a huge maze of a train station and immediately got lost.  We should have simply asked for Via Cavour, the main road that our hotel was on.  It runs right by the front of the station.  (We by mistake walked in the opposite direction).

At the train station,
It cost .70 Euros to use the bathroom. (How do the poor survive?)

On the street,
Graffitti everywhere.  There seems to be no effort to remove it, even from government buildings and from the exterior walls of expensive stores.

At the hotel,
1) turning the lights on --  We had to put (and keep) the room key in a slot by the door before the light switches would work.
2) turning the TV on -- The power button on the remote did nothing.  Rather, we had to hold down the button that changes the channels.
3) getting a dial-tone on the telephone -- We couldn't place calls from our room, only from the front desk.  To call the front desk, hit 9.
4) flushing the toilet -- There were two buttons for flushing the toilet: a small one for a small flow or water and a large one for a large flow of water.  (Every place we went to in Rome had this same kind of toilet.)
5) door knobs -- The knobs in the hotel room didn't turn.  Rather you had to push a button to open.

The river,
1) The Tiber River (now called Fiume Tevere) winds through the heart of the city, but, strangely, is undeveloped.  There are a few tourist boats, but no piers, no shops, next to nothing on the adjacent streets on either side of the river, and nothing at all down below at the level of the river.  Nothing at all like the Seine or the Thames.
2) Guide books detail a couple dozen "tourist walks" through Rome.  None of those walks follows the river.

Prices,
The prices are ridiculous, compared to Boston.  A simple lunch at a relatively inexpensive snack bar/sandwich place can easily run to 30-40 Euros per person (around $60 to $80-- about three times what I would expect to pay for the same fare at a similar quality establishment in Boston.  Benchmark -- a Big Mac at McDonald's (just the sandwich, not the value meal) costs 6 Euros; a coke in a typical vending machine costs 2.5 Euros.  Rule of thumb -- take the Boston price, add 50% because it's Rome; then double that because the dollar has sunk so low.

Food,
The food of Rome was a disappointment.  At home, I love Italian food.  Here it's barely edible.  We sampled about a dozen restaurants throughout the central area.  They were not cheap.  The best food was at a Chinese restaurant next to the hotel.  The Italian restaurants all offered very similar dishes at very dissimilar prices and it was all uniformly tasteless.  The pizza had thin hard dry crust.  Spaghetti with meat sauce ("ragu") had no visible meat.  The lasanga tasted like it came out of the freezer sections at the supermarket.  The ravioli was tasteless -- far inferior to the canned variety back home.  "Beef steak" was at best a millimeter thick.  (They give you no choice of how the steak will be cooked.  it all comes our dry and hard.  The chicken -- regardless of the fancy name they give it -- is dry and tasteless.  On my last day in Rome, I was delighted with a Big Mac at McDonalds -- the best meal I had all week.

After collapsing in the hotel room, exhausted from jet lag, compounded by the plane leaving Boston two hours late, in the evening, we walked to the Coliseum and then the river.  The Coliseum was about a quarter mile from the hotel, and it was about two miles from there to the river, near the entrance to the Vatican. We saw no reason to use subway, buses or trams.  Everything we were interested in seeing was within walking distance of our hotel on Via Cavour -- and we were very interested in exploring the everyday streets and alleys in between that we would miss on public transportation.

We walked about two and a half hours through back streets from Via Cavour to the Vatican.  When we paid for the Vatican tickets online we were given a start time of 9 AM.  So we left the hotel early and scrambled to get there on time.  The online directions said we should turn in our printout/confirmation at the Customer Care Office to the right at the entrance.  What they didn't make clear was that the entrance to the Museums is not the same as the clearly marked and easy to find entrance to the Vatican itself.  Rather it's about a kilometer away.  Since we had paid for 9 AM entrance, we sprinted that last kilometer.  then we had to go past the main line to find the prepaid line (marked "reservations only).  Then after the security check, we had to guess to go to the "Casa Online" (not "Customer Care") line to get the tickets.  (Online we were told Customer Care would give us vouchers and then we'd have to wait in another line to trade those in for tickets; instead we were given tickets to begin with).

Finally in, we started following signs for "Capella Sistina", which led us about a five-mile hike upstairs and down and around and around, though one room after another displaying "artwork" -- like the maze of the Louvre -- until we finally arrived at the Sistine Chapel -- a huge disappointment.  Yes, the well-known Michelangelo "Creation" and "Adam and Eve" are on the ceiling.  But they are lost in the midst of a total hodgepodge of ridiculously busy mixed up paintings.

If the room were darkened and a spotlight focused on one scene after another, accompanied by music (and/or narrative), it could be an amazing experience.  It would also help to be able to recline and comfortably look up at the ceiling.  But as it is, the poster of the individual details are far more impressive than the chapel itself.

NB -- the toilets in the Vatican Museums have no toilet seats.

In St. Peters Square, on the outside wall of the cathedral, there a huge advertising billboard for a power/electric company.  And a couple of other billboards for Italia Telecomm are on the wall on the opposite side of the square.  What a sacrilege.

There are also two big Panasonic flat screen TVs right in front of the cathedral.

The endless snaking lines in front of St. Peters, with crowd-control ropes resembled the lines at Disney World.  And it felt very strange having to go through a slow and thorough security check before entering the cathedral.

We slept late, then walked through back streets to the Coliseum and the nearby ruins.  We rambled up paths, stopped in a few old churches.  We didn't buy any tickets, didn't hire any tour guides.  it was a delightful day.  We soaked up atmosphere and got a good feel for where everything is.

We got tickets for forum/Coliseum/Palatine ruins.  The ticket booth is on the main street (Via dei Fori Imperiali, near the intersection with Via Cavour.  It's back from the road to the right of a church.  It's easy to miss.  The line was short because there are no signs and it's hard to see.  Down the block at the Coliseum you'd have to wait in line for half an hour or more to get the same tickets at the same price (12 Euros, good for two days).  As with the Vatican, these ruins are too much of a good thing.  You soon get sated, and one ruin gets jumbled in your mind with another.

Starting at the church of Santa Maria Maggiore, we walked down side-streets and alleys to the Coliseum area.  We could see the Coliseum most of the way downhill.  And we saw ruins randomly everywhere on street corners and in ordinary public parks.  The Palatine Hill with the ruins of residences of emperors and notables was the best of the tourist ruins areas.  Great view of the city from there (including St. Peter's in the distance).  Nearby, the Circus Maximus is an immense empty space.  Practically nothing remains of the original structure.  From the nearby Capitoline Hill we got more varied views of the Forum, Coliseum and Palatine ruins.

Next we talked to the Trevi Fountains (memorable from "Roman Holiday" with Audrey Hepburn). Then the Pantheon.  This is probably the only Roman temple that is still in fact.  Unfortunately, it survived because it was converted to a Christian church.  And it's the Catholic Church rather than the state/archaeologists that controls it.  Hence there's nothing at all to indicate what it might have been like in ancient times.

When we woke up, a parade was going past the hotel -- fans of some soccer team. Then all day long, on our walks through the city, we kept intersecting with another far larger parade by the national labor union CGIL.  There were representatives of many different trades from many different parts of the country, all carrying red flags/banners, some with the communist hammer and sickle.

We walked to the Spanish Steps. Unfortunately, they were obscured by replicas of the Berlin Wall, as part of a celebration of the 20th anniversary of the end of communism/the Cold War.  (Ironically, the labor demonstration/parade might have been in commemoration of the October Revolution).

The Borghese Gardens are huge, pleasant -- very much like Central Park.

Barb and Lois took a bus tour, revisiting many of the places we went to on foot.

I went for a stroll to the park that overlooks the Coliseum, where I read the volume of Livy's rome entitled "Rome and the Mediterranean". Sitting in that park, in the distance local teams were playing soccer and volleyball.  Locals were walking their dogs.  to my right were Roman ruins still being excavated.  Straight ahead and lower the Coliseum, and beyond that the Palatine Hill.

That was by far my best day.

Future trips to Italy will be not to see and learn, but rather to relax and enjoy -- to read and to write while savoring the atmosphere. 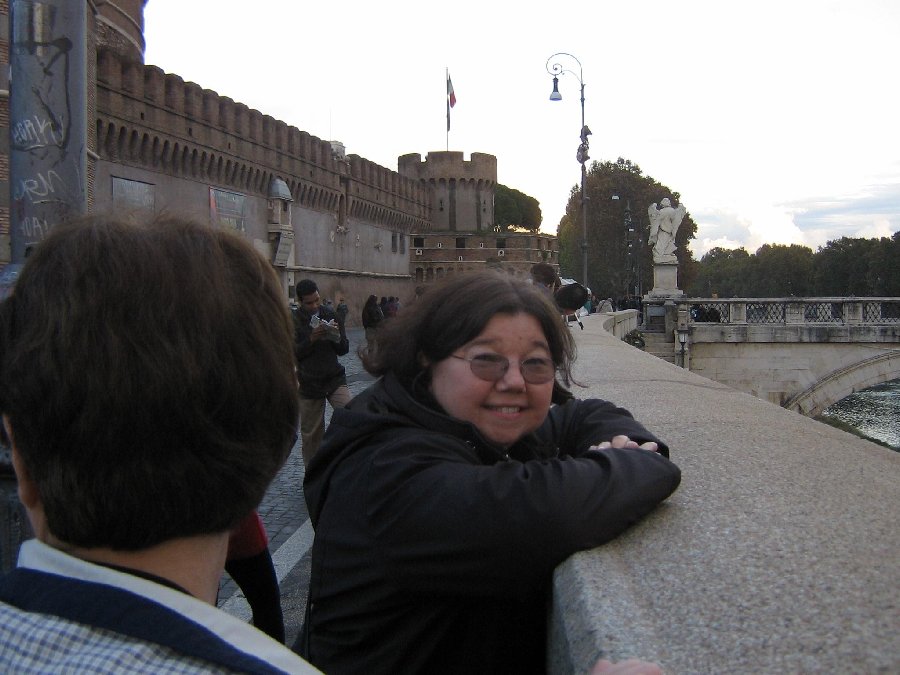 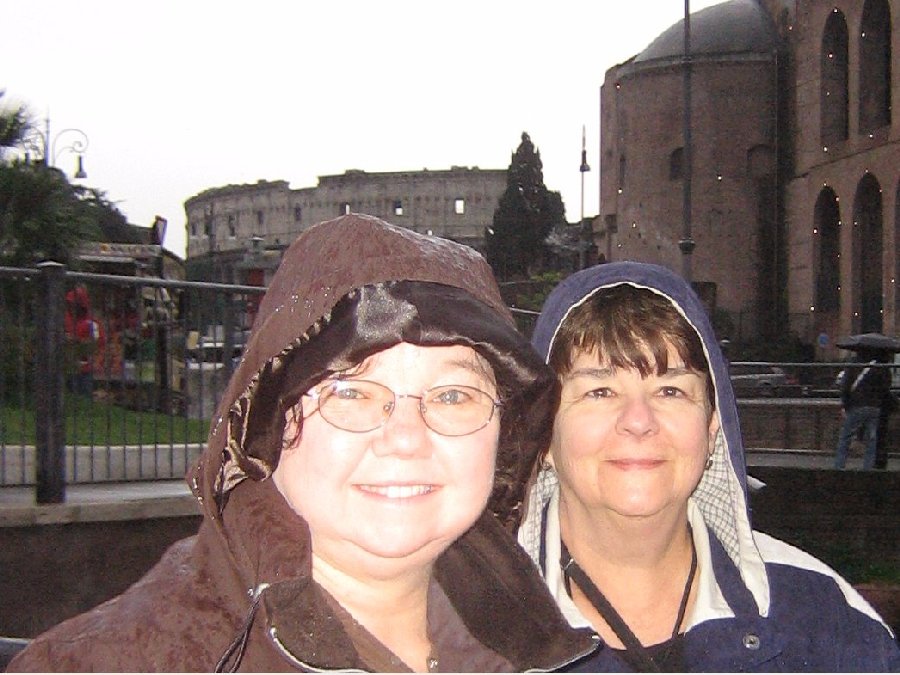 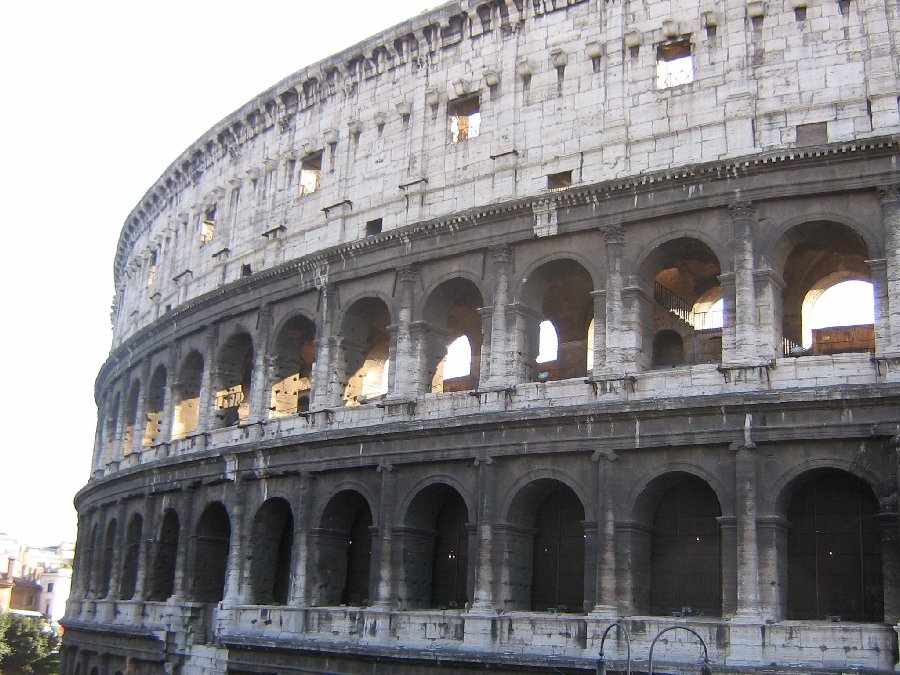 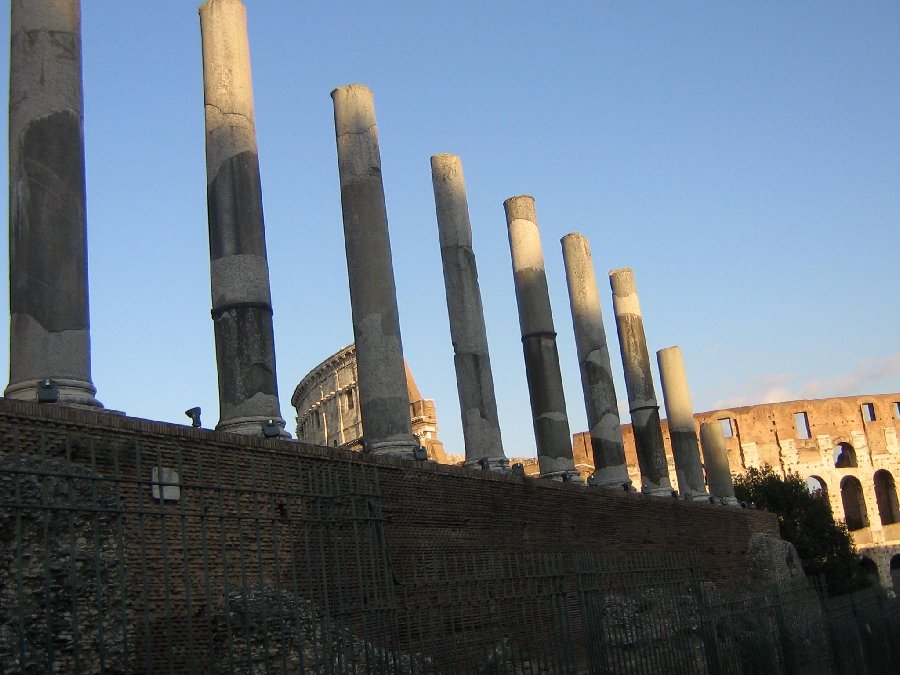 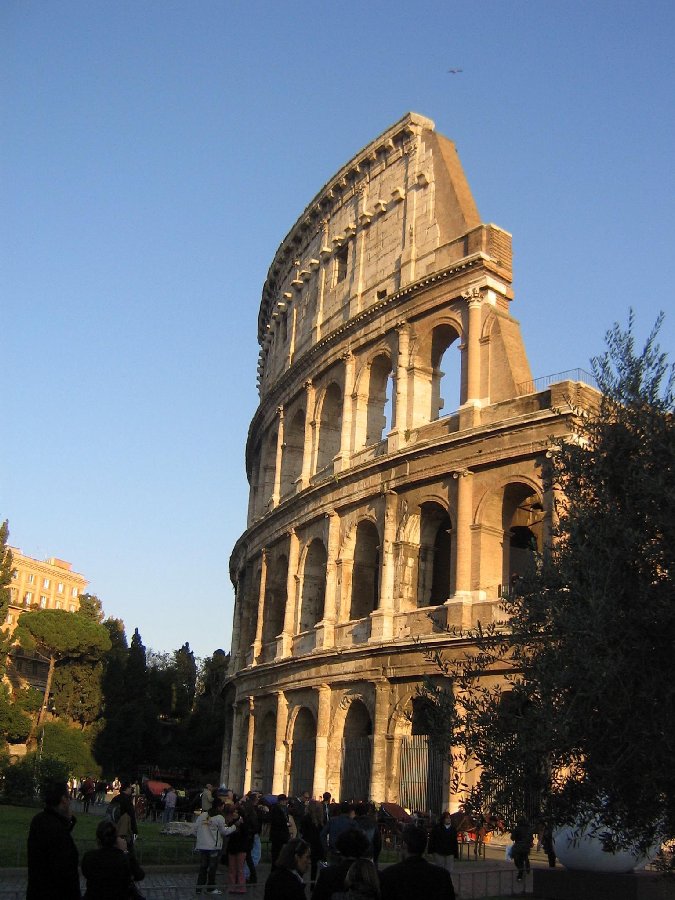 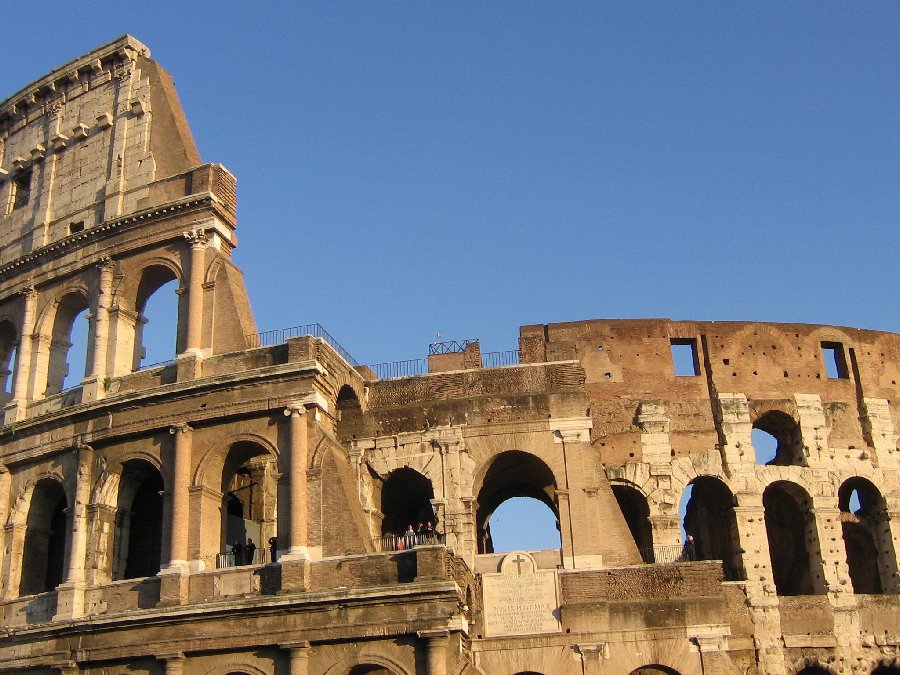 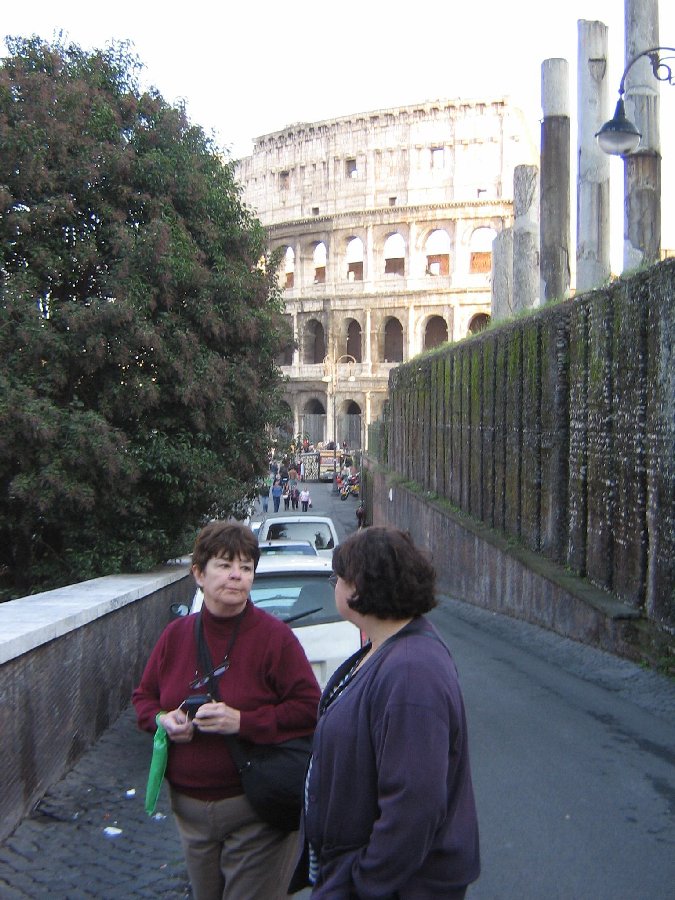 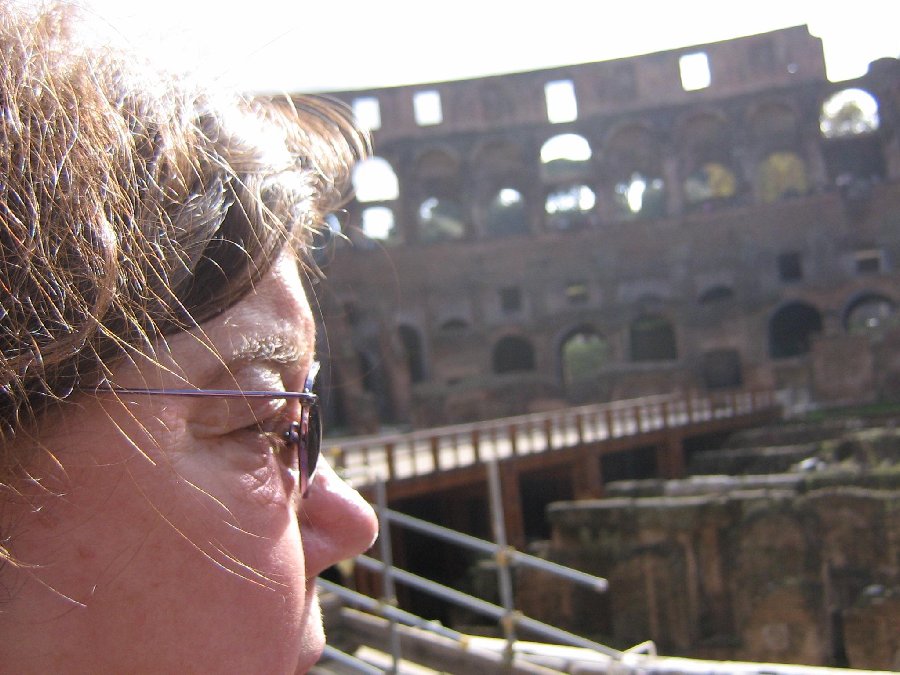 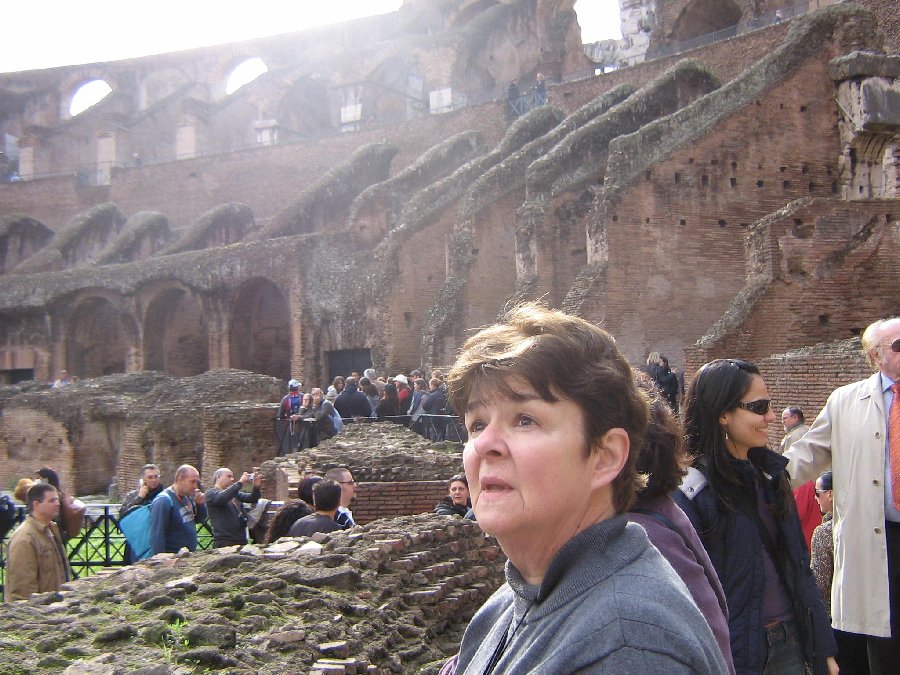 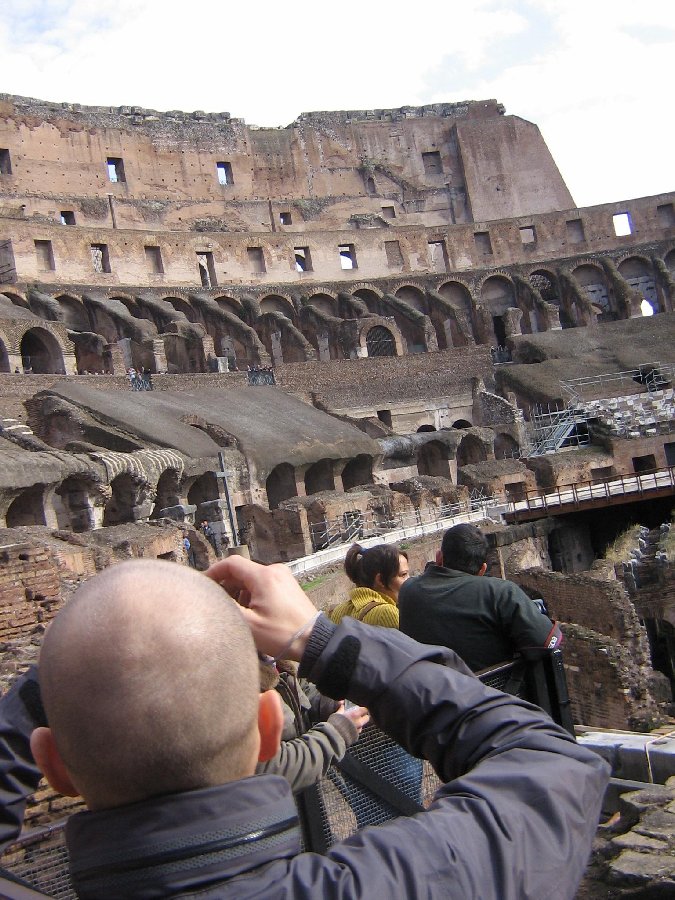 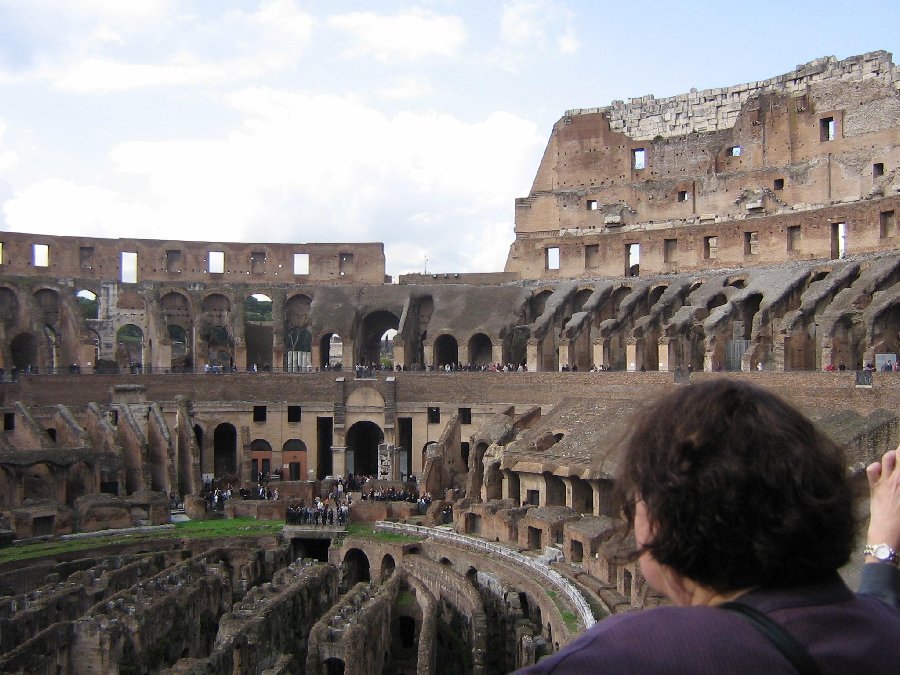 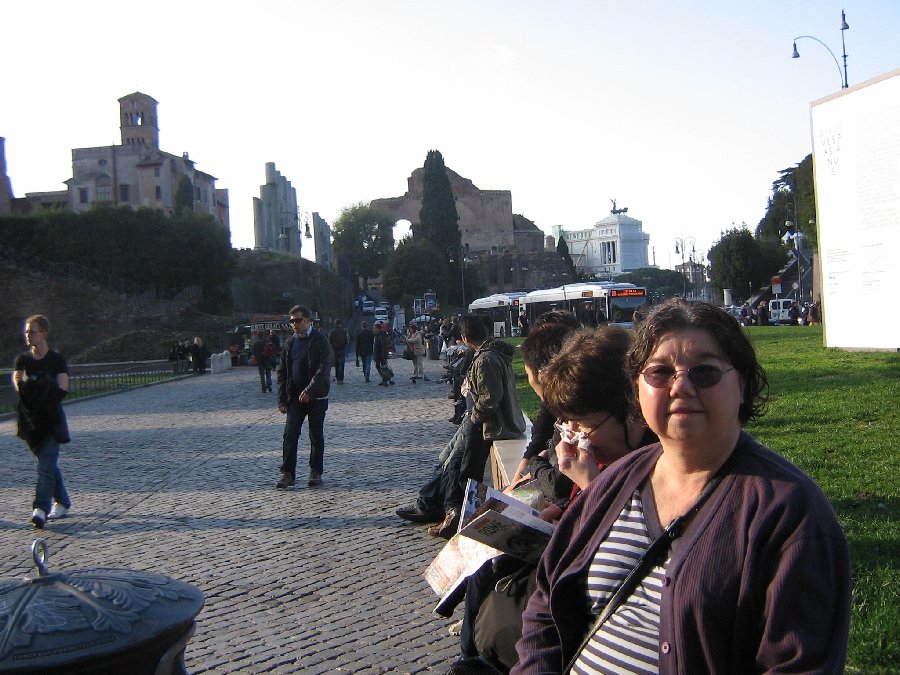 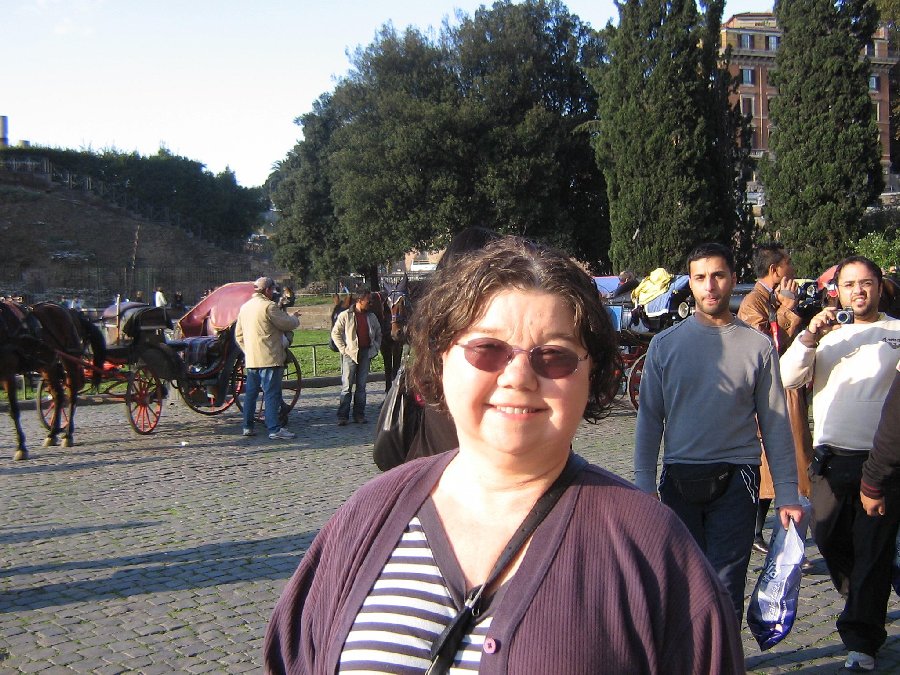 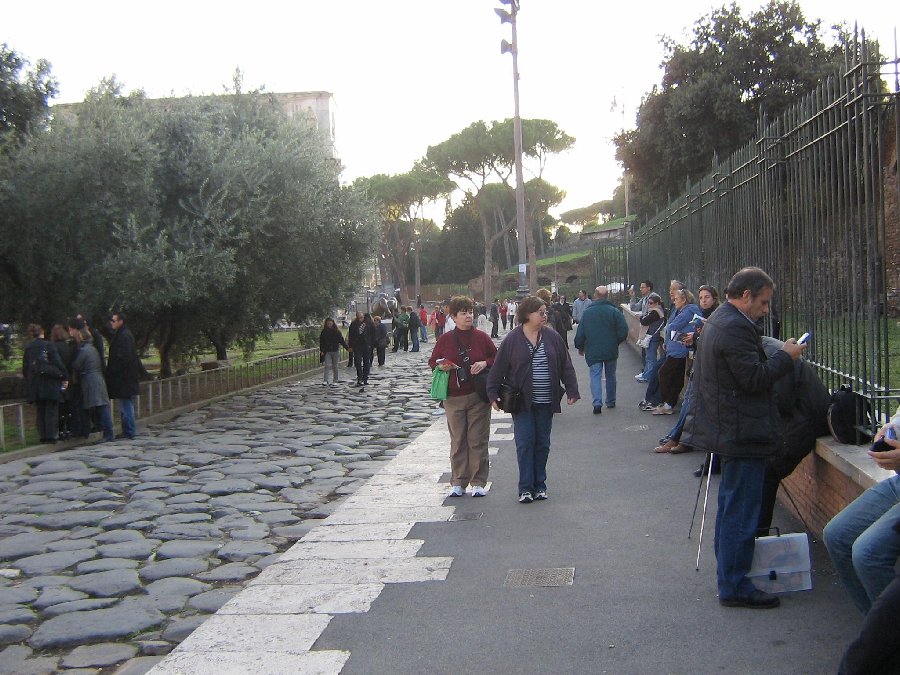 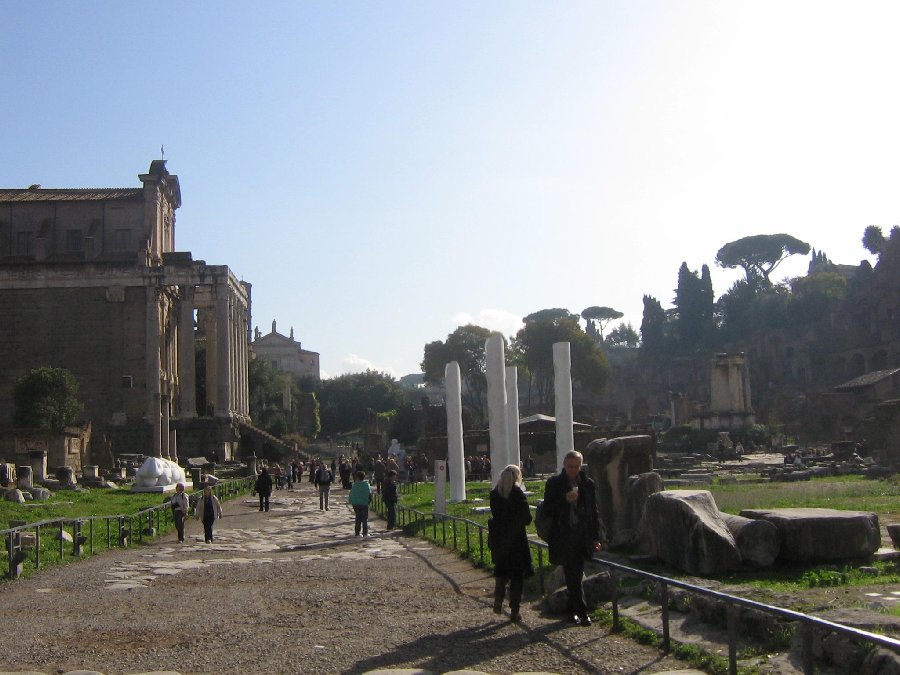 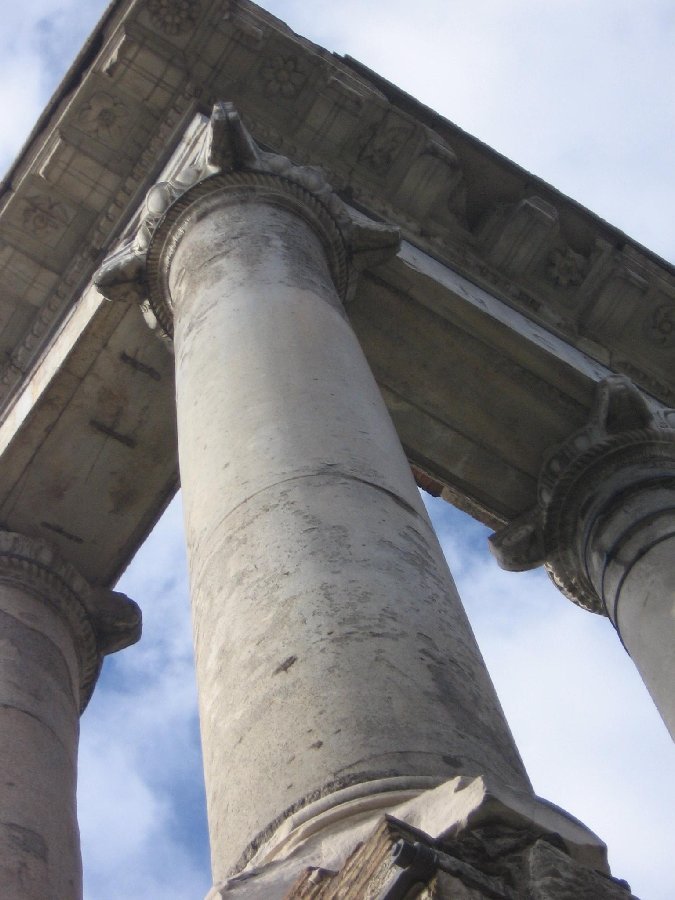 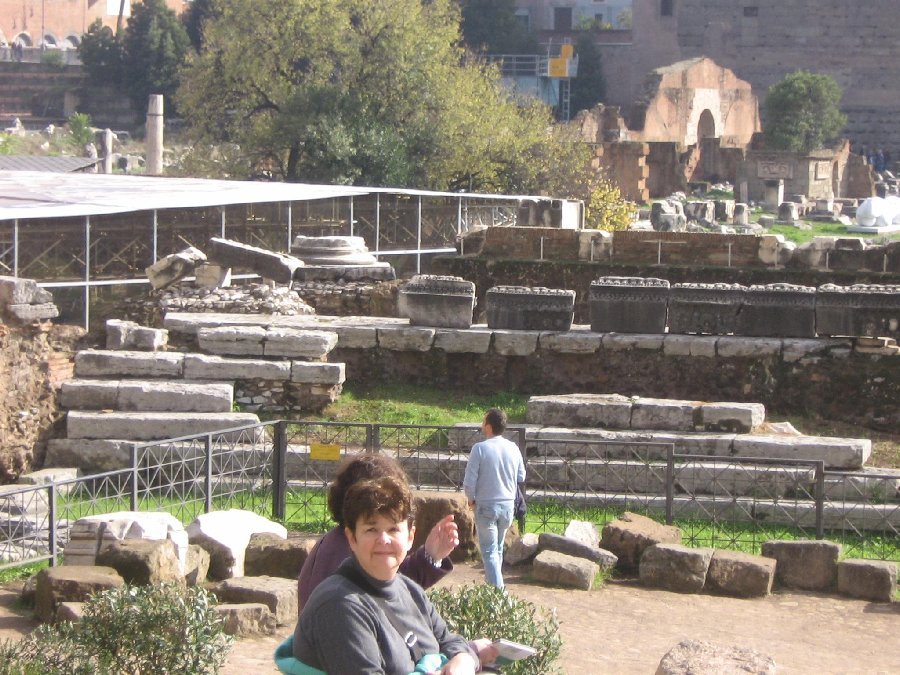 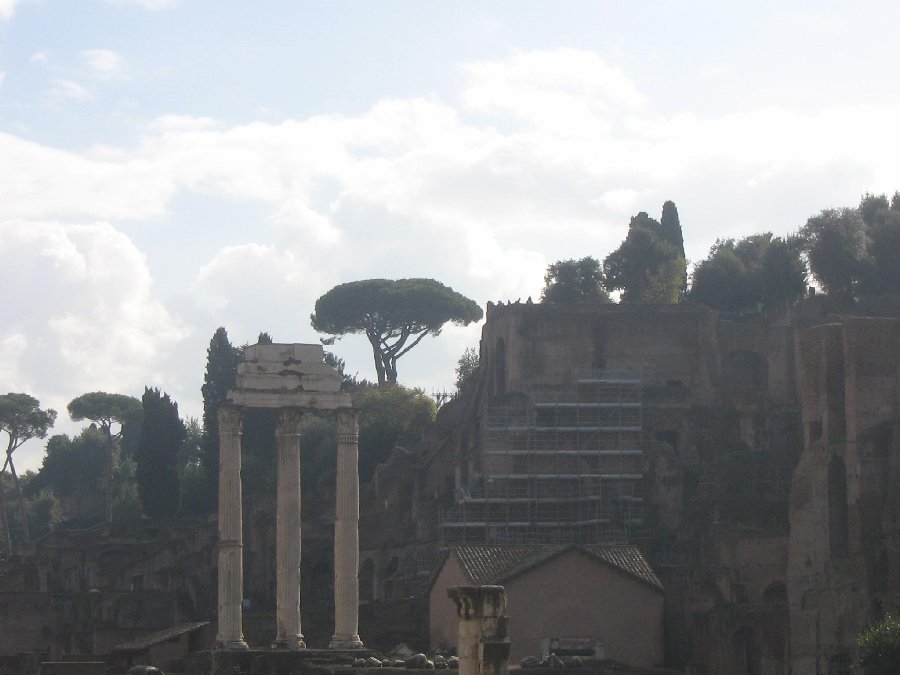 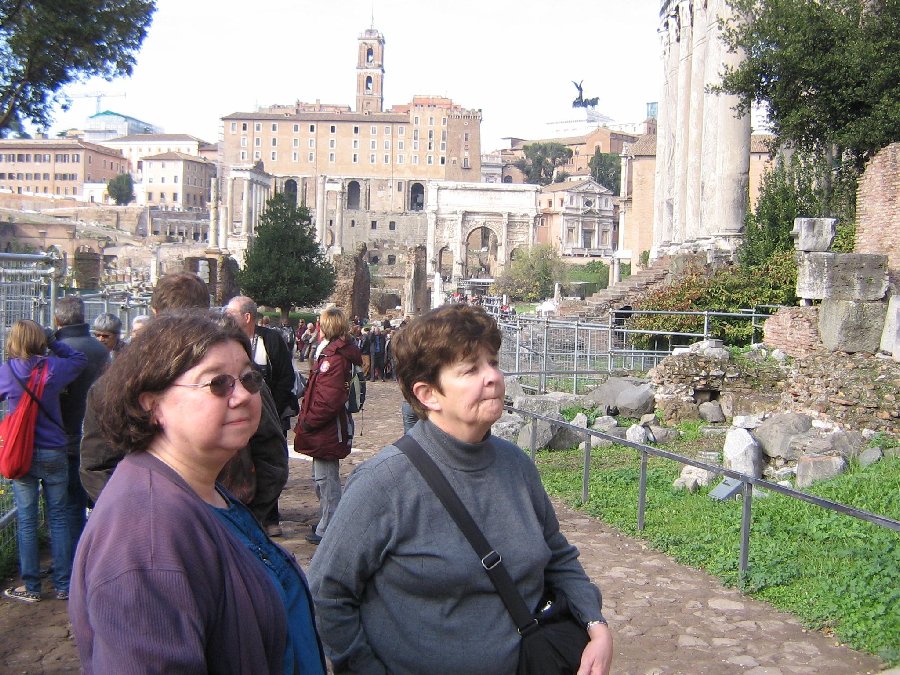 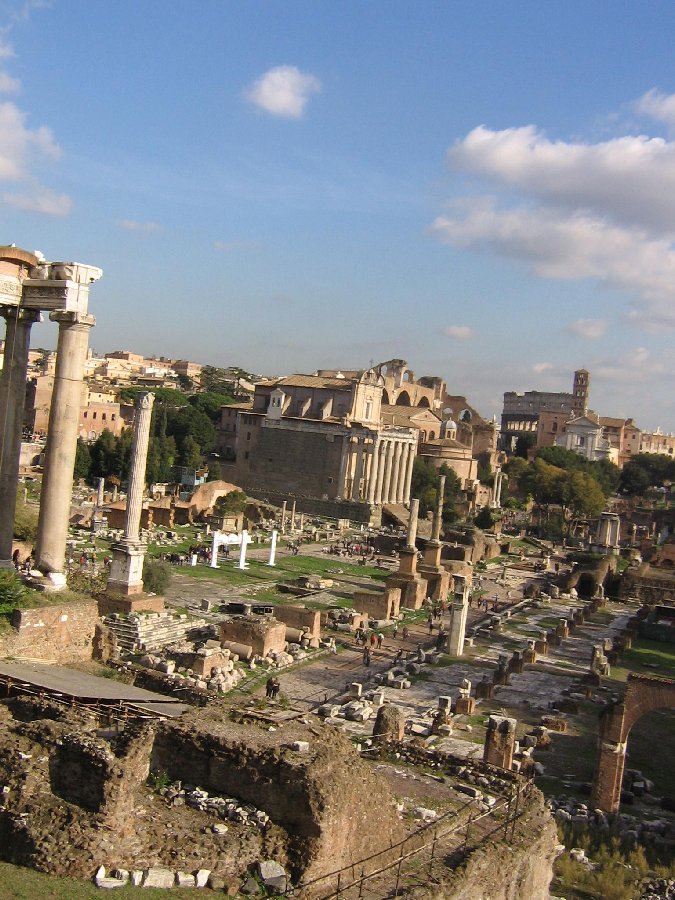 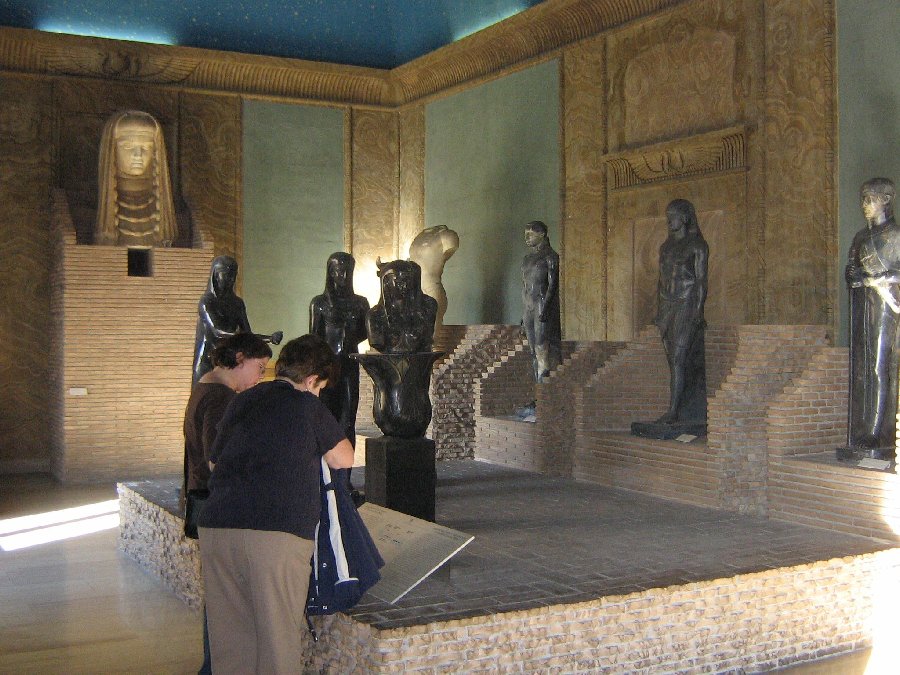 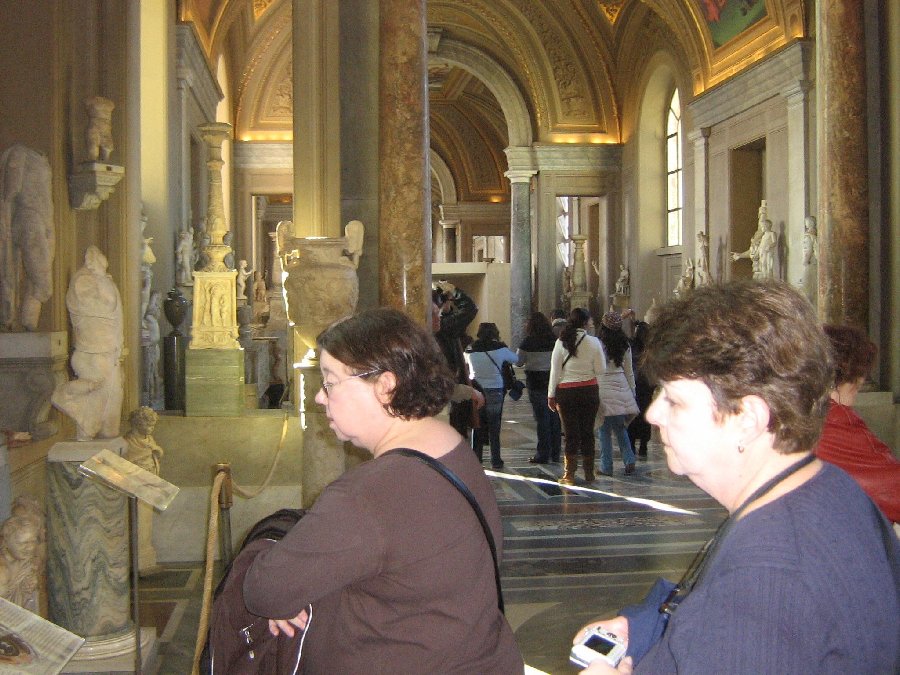 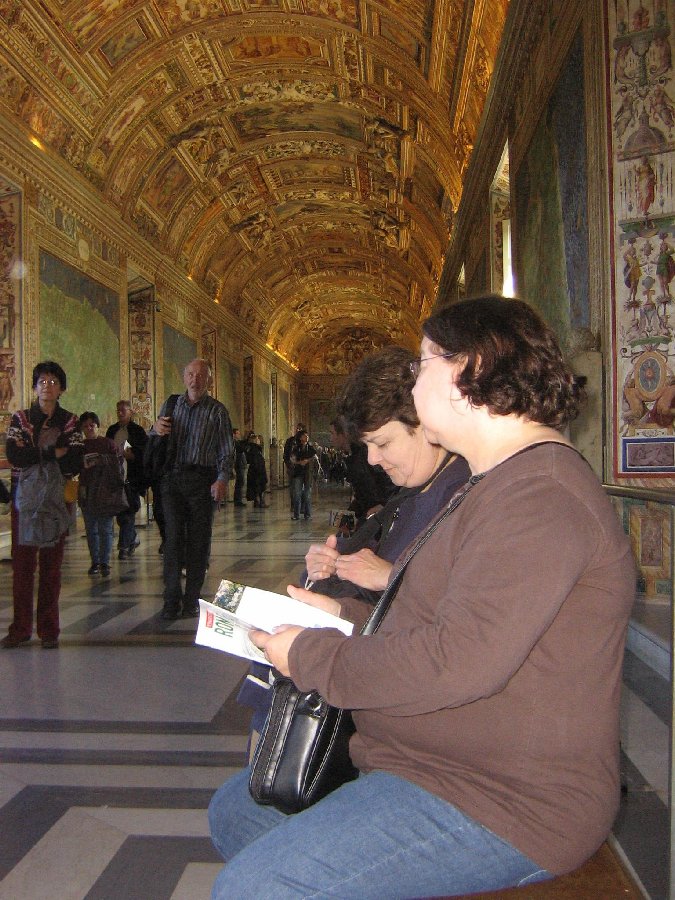 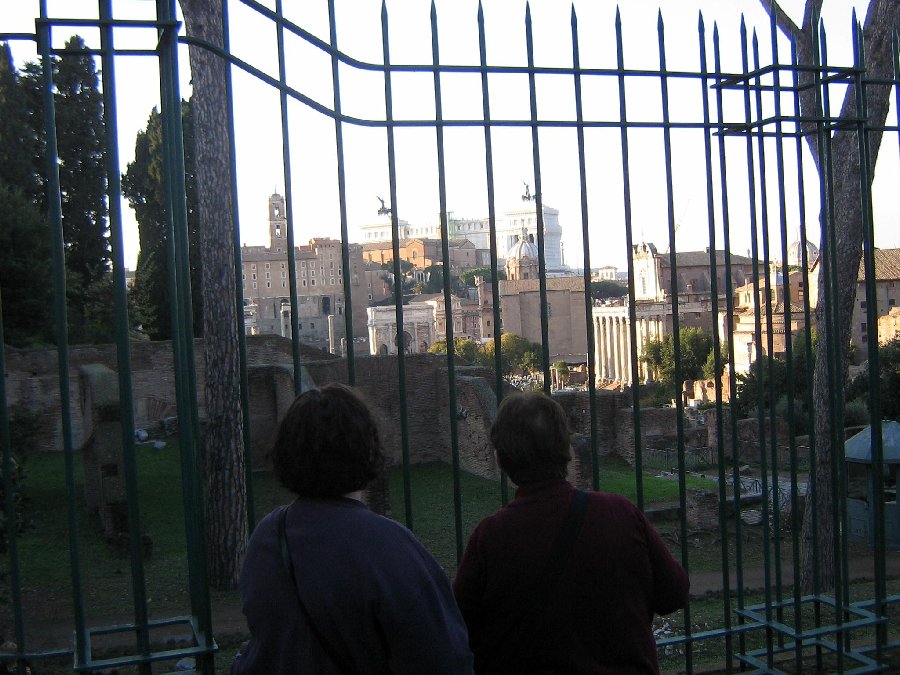 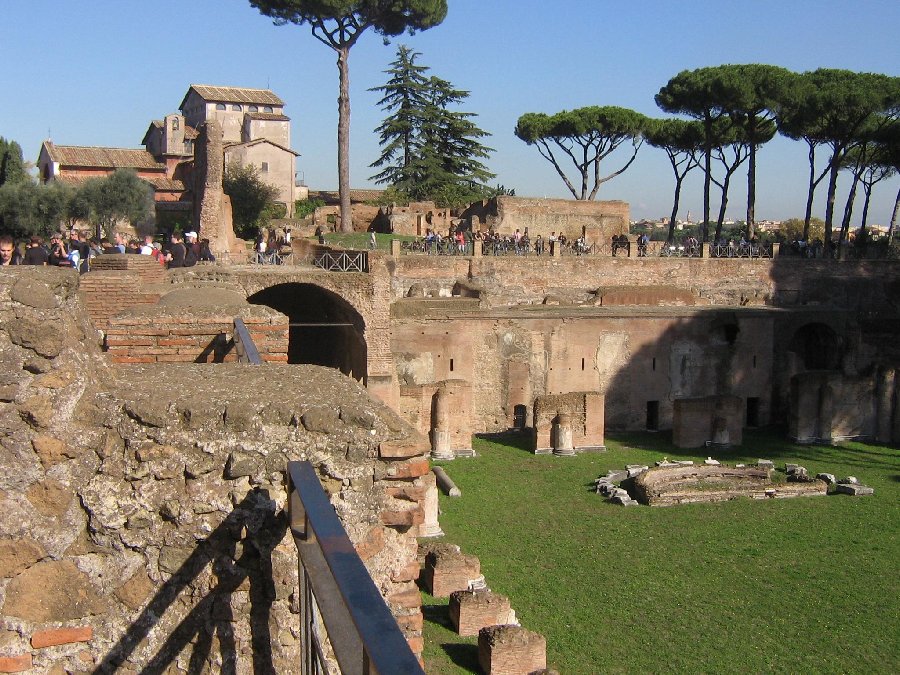 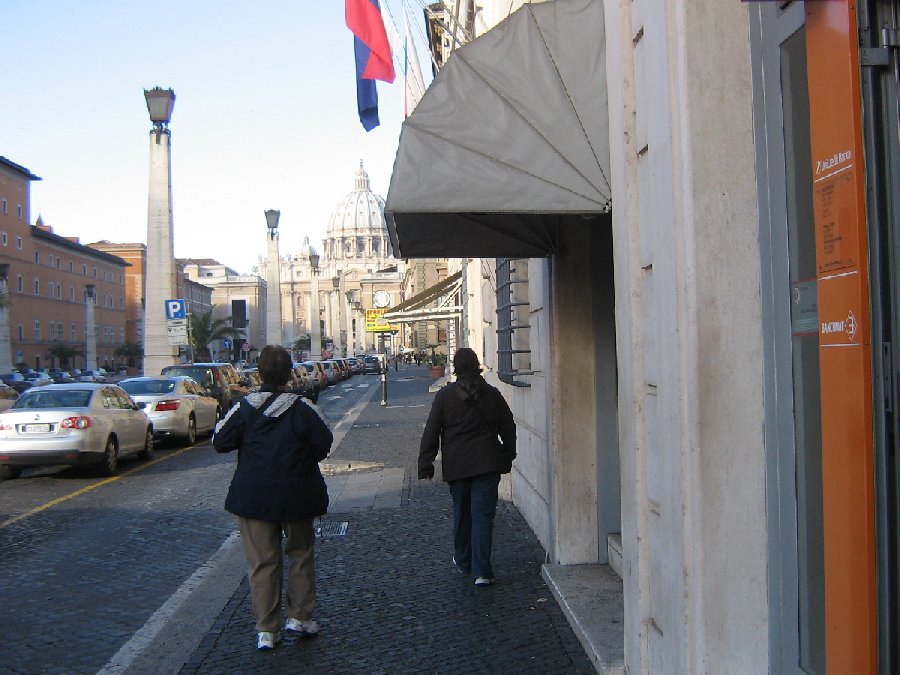 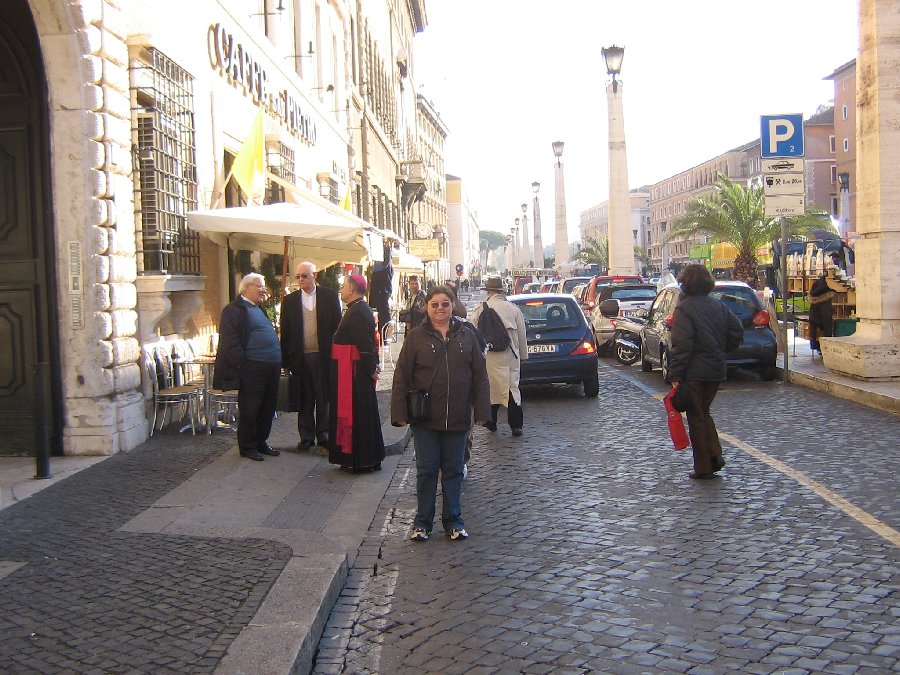 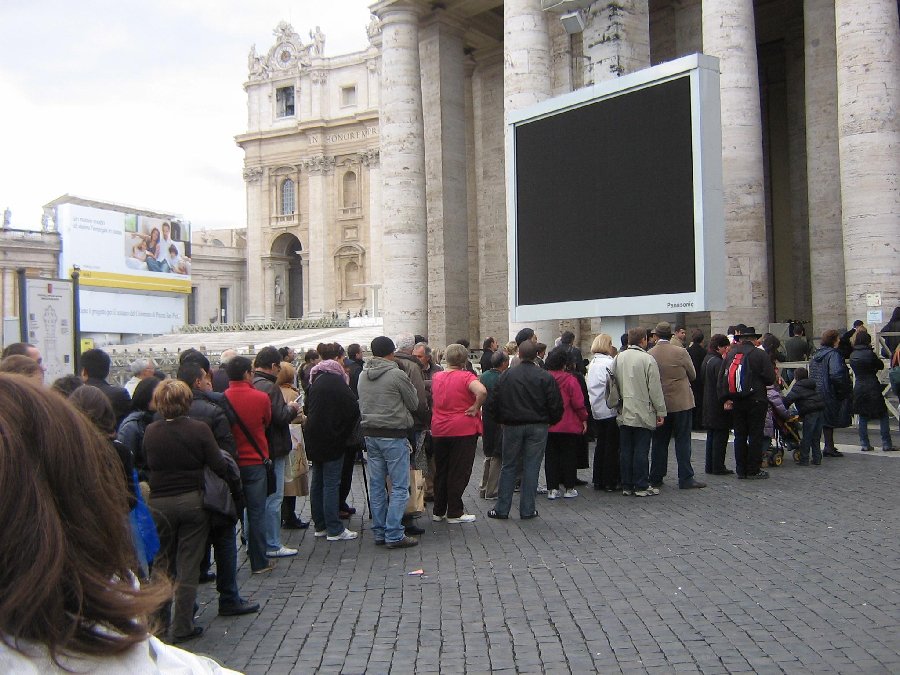 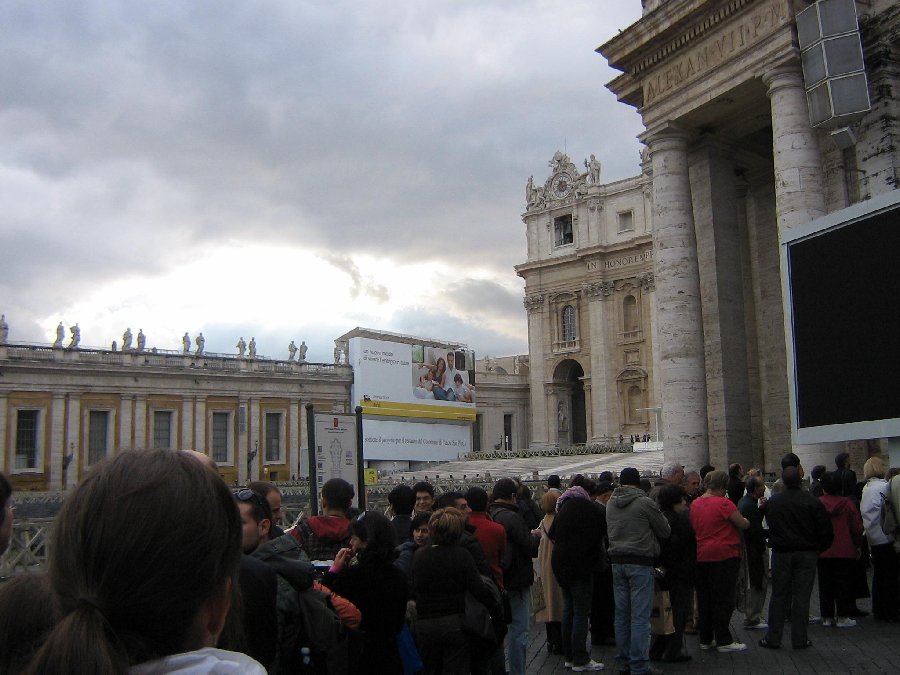 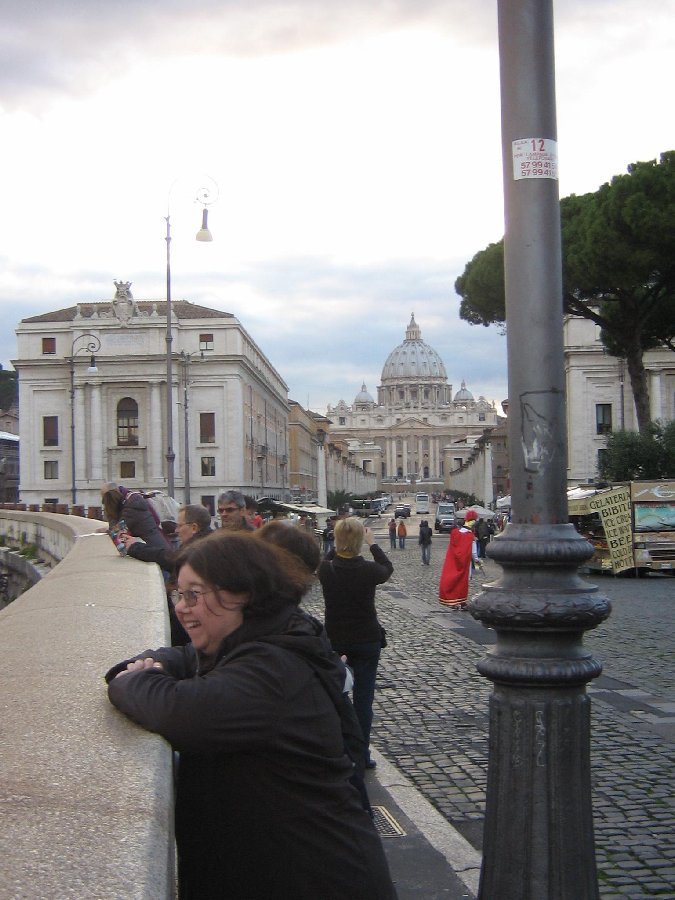